I am a writer and a journalist living in Bucharest, Romania.

Rhea Cristina is my pen name, as a writer.

I have published 9 books in the field of Literature, Journalism and Communication Sciences and emerged as an important member of the new generation. I am the founder & owner of the lifestyle website Great Fashion, www.greatfashion.ro. 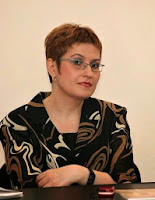 I have been accepted for Graduate Studies in the Master's Degree Program at the Indiana University School of Journalism (USA) for the fall 2005. Offer declined.

In 2007, I was a scholar of Kulturkontakt Austria “Writers-in-Residence” Creative Residence (scholarship) Program, Vienna, Austria.

I hold a BA degree in Journalism (Bachelor of Art -- the 3+ 1 programme, equivalent a BA + MA in the EU member states) from the University of Bucharest, the Department of Journalism and Communication Sciences, Bucharest, Romania, 1997.

I have published 9 books in the field of Literature, Journalism and Communication Science.
Please, see them at: http://cristina-rhea.blogspot.ro/p/published-books.html .

1996: The Award of the Romanian Writers Union (Dobrogea Branch) for my Stranger’s Eye, poetry book

I am a correspondent/contributor of „The Aspera Romanian Educational and Charitable Foundation, Inc.“, Boston, Massachusetts, USA (www.memoria.ro) that represents a digital library of interviews, memories, oral history studies, books and images of Romanian recent history) since 2000.

Some of the interviews-surveys which have been published in my three published books („Europeans at our home“, „22 witnesses to the Destiny“ and „Romania, which has vanished“) exist on this site, in Romanian and English.

I had a weekly broadcast named „A Cultural Dialogue” on the TV5 Europe SIGMA Channel, Bucharest, where I had dialogues with representative personalities of the Romanian culture (1995-1998).

My academic and professional interests are the following:

social and cultural aspects of journalism and communication; 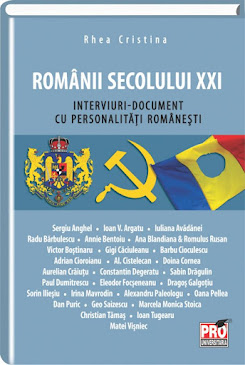